Ayahuasca: Everything You Need to Know

Ayahuasca is a powerful plant medicine that has been used for centuries by the indigenous Amazonian tribes of South America for religious purposes. Its power comes from its ability to help you delve deep into your subconscious, allowing you to release old patterns and beliefs that are holding you back in life. This can be achieved through ayahuasca's two main ingredients: ayahuasca vine, also known as Banisteriopsis caapi, and chacruna leaves, also known as Psychotria viridis. The ayahuasca trip, or what you experience when high on ayahuasca, usually lasts about six hours with the onset of effects coming in twenty minutes to an hour and it is an intense journey where one can go through many different levels of consciousness. In this article, we will go over everything you need to know about ayahuasca.

Ayahuasca, also known as Huasca, yagé, Kamarampi, Huni, brew, daime, the tea, la purga, is a traditional medicine and psychedelic drug that has been used for centuries by indigenous people in the Amazon. As noted above, it's made from the ayahuasca vine and chacruna leaves. The ayahuasca vine contains monoamine oxidase inhibitors, or MAO inhibitors, such as harmala alkaloids which prevent the breakdown of DMT, or N, N-Dimethyltryptamine which is a psychedelic compound found in chacruna leaves. When mixed together, ayahuasca can produce hallucinations and deeply spiritual experiences. 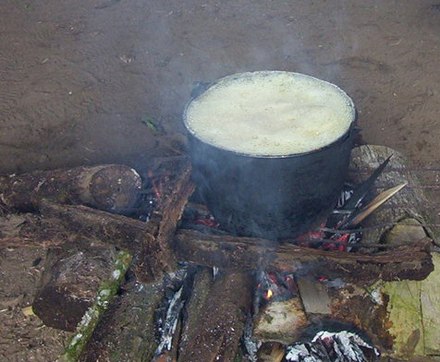 How does ayahuasca work?

The ayahuasca experience is caused by the combination of DMT and MAO inhibitors. When these two substances are combined, they create a chemical reaction that allows DMT to cross the blood-brain barrier, which is used to keep pathogens from entering the brain. DMT is not orally active when taken by itself because the monoamine oxidase enzymes in your stomach will break it down before it can be absorbed into your body. However, if you add an MAO inhibitor to ayahuasca, such as an ayahuasca tea made from ayahuasca vine and chacruna leaves, ayahuasca becomes orally active which can cause intense hallucinations and spiritual experiences.

How do you use ayahuasca?

Traditionally, ayahuasca is brewed into a tea that's consumed orally. The tea is usually taken as a single dose although the dose of ayahuasca may be split up as the ceremonial cup is passed from person to person. Once ayahuasca ingestion occurs into the body, it can cause intense hallucinations which are considered to be deeply spiritual experiences. Ayahuasca is entheogenic because of this, meaning that is used to induce spiritual experiences.

Many shamans will ask you to cleanse your body of toxins before an ayahuasca ceremony too. This may include drinking large amounts of water, fasting, and taking purgatives. Some shamans even suggest abstaining from cigarettes, alcohol, sex, or even switching to a vegetarian or vegan diet to cleanse your body from toxins.

Since ayahuasca contains MAO inhibitors, it can be dangerous to mix with other drugs or foods containing tyramine such as red wine, cheese, and chocolate. It's important to consult with an experienced ayahuasca shaman before consuming ayahuasca to learn about the proper way to use it and avoid any potential dangers.

What are the effects of ayahuasca?

The effects of ayahuasca can have very subjective effects meaning it can vary greatly from person to person. Some people report feeling little or no effects after drinking ayahuasca, while others describe intense psychoactive effects such as hallucinations and spiritual experiences. The length and intensity of the experience can depend on how much ayahuasca was consumed, your body weight, and whether or not you have taken ayahuasca before. While the effects of ayahuasca are very intense for some people, others may only feel a sense of calmness after taking ayahuasca. The most common positive effects people feel are euphoria and visual and auditory hallucinations. People may experience other psychedelic effects like ego death or disassociation from self, near-death experiences, feeling of rebirth, contacting spiritual beings, and visiting different spiritual realms.

What are the benefits of ayahuasca?

The benefits of ayahuasca are vast and vary from person to person. Some people report feeling a sense of profound spiritual awakening after taking ayahuasca, while others feel a deep connection to their loved ones. People often describe ayahuasca as a tool that can be used for personal growth and self-discovery. Ayahuasca can help people overcome personal challenges and connect with new levels of consciousness.

Many people believe in the therapeutic potential of ayahuasca thinking that it can also help treat mental health issues like treatment-resistant depression, PTSD (also known as post traumatic stress disorder), addiction, or anxiety disorders. Shamans have been using ayahuasca to cure physical illnesses for centuries too. Some shamans claim that ayahuasca is an effective treatment against everything from cancer to heart disease. However, there is not much scientific evidence to support these claims. It should be noted that all these benefits are purely anecdotal and more clinical trials and studies will have to take place on human subjects for these claims to be scientifically proven.

What are the potential risks or side effects of ayahuasca?

The risks of ayahuasca are dependent on how it is used. The most common side effects include nausea, vomiting, diarrhea, increased blood pressure, and increased heart rate. People who have taken ayahuasca report that the experience can sometimes be unpleasant or uncomfortable while they adjust to the drug's effect. Ayahuasca may also cause psychological distress in some cases if not used correctly.

People who are using ayahuasca for spiritual purposes may experience deep emotional trauma or anxiety if they come into contact with dark entities during the ayahuasca trip. There have been reports of negative experiences taking ayahuasca where people become frightened by their visions and end up in life-threatening situations, which has led to some governments banning ayahuasca. It is not uncommon for people to experience fear, anxiety, or panic and positive and negative experiences can be combined within the same trip.

How can I ensure I have a positive trip?

It is important to consult with an experienced ayahuasca shaman before drinking ayahuasca to learn about the proper way to use it and avoid any potential dangers. The shaman can also help you set positive intentions for your trip and provide support if you experience any adverse effects. It's also helpful to have a trusted friend or family member with you during the experience to provide support. Some people find it helpful to prepare for an ayahuasca trip by fasting or cleansing their bodies beforehand. It is also recommended that you avoid drinking alcohol and taking other drugs before ayahuasca.

The legality of ayahuasca varies from country to country. In the United States, ayahuasca is illegal and  considered a Schedule I drug which means it has no accepted medical use and a high potential for abuse. Ayahuasca is illegal in Canada, the United Kingdom, and Australia. However, it is legal in some countries like Peru, Costa Rica,  and Brazil. It's important to check the legal status of your country before consuming ayahuasca as it is an illicit drug in many countries.

Ayahuasca is a drug that has been used by indigenous people in South America for centuries. It works when you consume a tea made with ayahuasca vines and chacruna leaves. The ayahuasca vine contains MAOs, which when you combine them with DMT-containing chacruna leaves, can produce a very intense psychedelic experience. The drug is typically ingested in tea form and the onset of effects takes twenty minutes to an hour and can last up to six hours. People who take ayahuasca can feel many positive effects and negative effects too. Positive effects usually include visual or auditory hallucinations and a feeling of euphoria, which has antidepressant effects, among other effects. Negative effects include vomiting, diarrhea, anxiety, and panic. Ayahuasca is said to have many benefits including a greater sense of self, spirituality, and closeness with others and is anecdotally said have therapeutic effects on people suffering from depression, PTSD, and anxiety disorders although none of the benefits are scientifically proven. To prevent any negative experiences, it is suggested that you have an experienced shaman guide you through your trip. Ayahuasca is not legal in the USA but is legal in several countries in South America. Thank you for reading our article, should you have any further questions about ayahuasca and its effects it is recommended that you talk to an experienced shaman. If you have concerns about taking ayahuasca and the medical effects it may have on you please consult your doctor or healthcare provider.